Thanksgiving is a holiday that brings many people joy, comfort, and contentment. The holiday is one where family and abundance are celebrated, and it is considered by many to be the kickoff of the Christmas season. But what of the families who are not blessed with abundance, or even a filling meal on Thanksgiving Day?

Christ United Methodist Church (Tuscarawas District) in Alliance has been reaching out to this very demographic of people in their community (and some of the neighboring communities as well) by sharing prepared meals for families who do not have one to provide for themselves.

The program began about 13 years ago as an outreach through First Immanuel United Church of Christ. Other churches and individuals in the area joined together and helped by providing food, volunteers and even a place to prepare and distribute the meals.

“This started out as a community outreach to provide widows with a Thanksgiving dinner” shared Shane Abbott and Larry Gatts, both of whom have been volunteering with the ministry for years. “In those days the ministry provided a few hundred meals and people from all around Alliance became involved.”

Victor Lee has been involved for much of the program’s existence and today serves as the facilitator of the ministry.

“Since we do not have family in the area, my wife and I began volunteering at First Immanuel UCC on Thanksgiving Day the second or third year of operation. From the beginning, the program has always been organized and hosted by one group, but drawn upon the whole community for volunteers, donations of food, and other resources,” he said.

But after a few years this outreach providing a few hundred meals grew to almost 1,500 which stressed the small kitchen at First Immanuel UCC.

“In parallel, six years ago our church remodeled our Fellowship Hall and kitchen, so we have extra capacity. About the same time, the Alliance Neighborhood Center two blocks from us closed down.” Lee says. “The Neighborhood Center had provided office space to several small charitable groups and hosted a Tuesday night free community dinner. After a bit of networking and soul-searching, our church became the host for the Tuesday night community dinners and three community groups. We had established a mini-tradition of making our space available when others no longer have the space.”

When First Immanuel UCC considered ending this tradition because it was overtaxing its facilities, Lee spoke with the congregation’s pastor and learned that a few of the lead volunteers were feeling burned out and members of the church didn’t feel comfortable preparing 1,500 meals in its limited space.

“After consulting our Trustees, I offered to host preparing the meals in our Fellowship Hall and kitchen, if First Immanuel UCC still ran the event, which was very successful. The following year, First Immanuel UCC no longer wanted to run the program. After presenting the issue to the entire church and asking for their vote of support, we accepted the challenge and took over management of the program,” Lee said.

This year the Thanksgiving Meal Outreach served approximately 1,140 meals. Alliance, OH is a community of roughly 21,600 residents according to the most recent census estimates, and while some of the meals travel outside the city limits, most stay within Alliance. This ministry facilitated by Christ United Methodist Church provides Thanksgiving meals for roughly 5% of the city’s population. “I was surprised how many people were willing to come out on a family holiday and volunteer. And on the other side, I was surprised how many people are asking for a meal,” Lee shared. 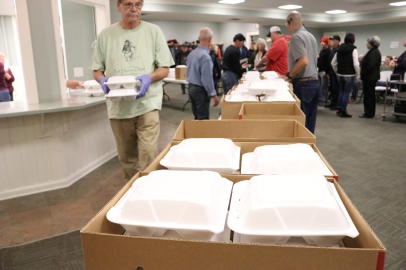 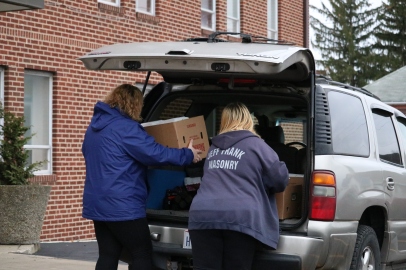 Lee said, “There is a club here in town that is similar to Alcoholics Anonymous that receives 30 meals from us every year. “There is also an apartment complex about a block from the church which is largely comprised of Senior Citizens. They receive around 70 meals each year.”

When the church building was constructed, it was built near the center of town, in a time when the railroad was a primary influence, and Alliance grew out from the rail systems. Currently the center of town has shifted to the other end where the highway is located. The city’s economic center has shifted away as well, leaving Christ UMC in the lower economic area of town. “A lot of our deliveries are close to our building as a result of the economic shift. Most are less than a mile away,” said Lee.

Rev. John Partridge was on hand to volunteer, plugging in wherever help might be needed. He spoke of the convenience for families in the church to volunteer with this ministry. “You see lots of people come and go throughout the day because everyone has family stuff on Thanksgiving. Some people can come volunteer for an hour or two and then go have their own Thanksgiving traditions with their family.”

The church wants the families who are receiving the meals to know that there is more than a free meal to be had. “It’s very ecumenical. We’ll say a blessing before we start the deliveries, and there is a card on some of the deliveries that includes a list of churches involved,” Lee said. “We don’t want to be too pushy but want them to know they are welcome any time. It is a good cross section of all the houses of worship in the city.” 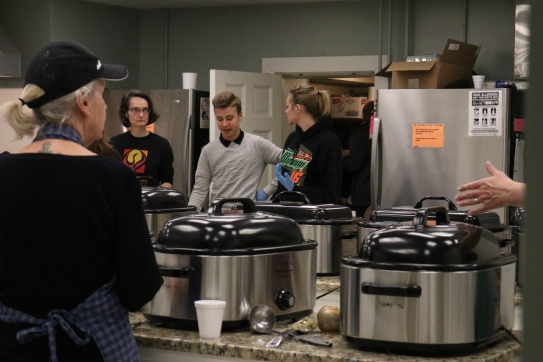 When given the opportunity to reflect on the future of the Thanksgiving meal ministry, Lee shared that they would like to be able to do more than just deliver meals, perhaps even spend time building relationships with the individuals they are visiting. He also looks back at how the church arrived at this point.

“Last year was the first we were in charge, and it was an affirmation of how wonderful — both generous and smart — people can be. There is no way I could run it myself. The kitchen crew figured out what to do and did it. The same with the team who boxed up desserts and dinner rolls. We didn’t start the program but when the opportunity came to take it over, we took the leap of faith. We thought it was a good program and it should continue, and we’ll do it,” Lee said.

For those who might have some desire to begin something that has such an impact in their own community, Rev. Partridge has some words of encouragement to share. “Don’t be afraid to try something bigger than you imagine. Because God and God’s people will rise to the occasion.”

If you have a story of how God is using your local church to transform the community, please contact us at eoccommunications@eocumc.com. The East Ohio Conference Communications team wants to tell your story.

*Brett Hetherington is the Communications specialist for the East Ohio Conference of The United Methodist Church.