The day in Rio Bravo, Mexico was hot, and we were sweltering even in the shade at the elementary school. But the mother and her little ones waited patiently in the cement courtyard for their turn to see our medical mission team that she hoped would help her family. Though not a mom myself, I could recognize the distress of the infant screaming in her arms as she tried to comfort it.  Too hot for a baby, even I knew, but what could be done? Our devotional that morning had challenged us to look for miracles, and right then I was praying for one. 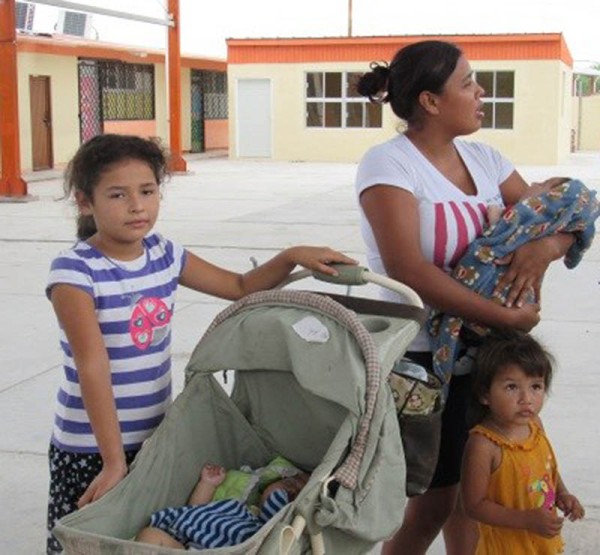 After a moment I approached the mother, and with a feeble attempt at Spanish and hand motions I asked her permission to put the baby’s blanket over its head while I soaked it using my water bottle.  I wasn’t expecting it to help much, but that’s all I could come up with.  To my great surprise the baby quieted almost instantly, turned to suckle and went to sleep.  So maybe we weren’t walking on water, but I needed no interpreter to translate the look of relief and gratitude on Mama’s face.

I turned my attention back to our work and they turned theirs back to their waiting.  But it wasn’t long before a shy, sweet-faced little girl approached me.  Her words came faster and more numerous than my brain could translate, but I caught enough to understand her plea: “tiene” and “agua”.  Do I have (or could she have) water.    We’d had an Igloo cooler of It somewhere, provided for the team at lunch, but where it was, and how much water there was, I had no clue; and we were still too busy for me to go searching.

Ok.  So in our culture it is frowned upon to drink from the cup of a total stranger, or expect a stranger to drink from your water bottle.  But it’s not like these folks carry Dixie cups with them everywhere.  Still, the day was hot, and she was thirsty, and it just wasn’t in me to deny her when there sat beside me a half-filled water bottle still chilled from the morning.  Good protocol or not, with a shrug I handed it to her and went on with the task at hand.  She promptly took it to share with her siblings, and, to my surprise, she returned minutes later to give it back.  It wasn’t empty.  Thirsty as they were, they’d left most of it for me.

That challenge met, the flood gates opened.  One after another the children (who had earlier been rather wary of me) came forward.  “Agua?  Agua?” They asked.  Into my head popped Jesus’ words about giving a cup of cold water to “the least of these,” — and what happens to those who don’t.  But what could I do? No agua, and now not even a bottle!  Ok, Lord.  This one’s on you.  Miracle needed – or at least a good plan.

Fortunately our stream of clients had slowed to a trickle so I had some time to think.  Our team leader, Chad, was loading some things into the van when I approached.  There in back was the Igloo cooler – not water, but tea, along with a half dozen Styrofoam cups.  That would do. “Better to empty it here than haul it back,” I suggested.  He lugged it back to the courtyard for me and soon we were set to go.

As you might surmise, I now faced a new challenge.  We had more “te” and more thirsty people than we had cups. With the help of my Kindle Spanish medical dictionary, I learned the Spanish word for cup – “vaso” (think “vase” or “vessel”).   So now when the thirsty little niños approached, I coaxed them to talk to me, even though I knew what they wanted.  “Te?” they would ask, one after another.

The day was hot and they were thirsty.  Somehow, despite my faulty grammar, they understood. They shared their cups and the tea with one another in a way I doubt many Americans would. Thirst satisfied, problem solved; I moved on to the next challenge without much thought.

It was only much later as I lay in bed that I began to fully consider what had happened that day.  How frustrated I felt that those little ones, (and the adults too for that matter) were genuinely thirsty in the mid-day heat, and I knew we had that big cooler nearly filled with what they needed; yet we had no “vasos” – no cups – with which to share the life-restoring liquid. That gap had tormented me.

Although I tried to fall asleep my thoughts returned to Jesus and the Women at the Well (John 4).  On that day it was Jesus who thirsted in the heat of the day.  It was he, the Son of God, who pleaded, “Give me a drink.”  She, a woman and a Samaritan, was also thirsty – for so much more than she knew – for “living water” – for connection with one who would love her authentically.  Jesus offered, but she did not grasp at first.

“Sir, you have no vessel with which to draw.”  Indeed he did not – no cup with which the water could be shared.  Her words evoked from me a stream of tears.  In my mind’s eye I saw again those thirsty children and the adults who waited with them in hope we could provide something – medicine, vitamins, something to ease the pain in their lives, to know someone cares.  A thousand other faces came to mind – not just Mexican children, but those in my own community and nation;  Teens on the television screen pleading for a stop to school shootings, victims of domestic violence and sex trafficking begging to be rescued,  alcoholics, and addicts desperately eyeing their next “fix.”  The faces flooded my imagination and I wept.  I wept because I know where the water can be found that will cool their thirst and heal their wounds.  I cried because I knew my ache was also his.

“Where are the “vasos?“ I asked; or he asked me, I know not which.  How can the water be shared without a cup? We in the Church know where the water can be found, so why do so many around us perish with thirst?  Where are the vessels?

I thought again of the Woman at the Well.  In the end it was she who ran to tell the village about the stranger who had changed her life.  Because of her they came to him, listened to him, and invited him to stay until they came to believe.  She, herself, became the vessel that he needed, the means of sharing Life, just as maybe that day I had been; and maybe this day, you are, too.

Who are the thirsty people around you?  We live surrounded by a multitude wasting away because no one has shared with them the Living Water of the Gospel.  Jesus is the Fountain of Living Water – those who thirst for him are many, will you be the cup he needs?

*Rev. Lee Ann Dunlap is in her 5th year serving as pastor to McConnelsville Grace, McKendree, and Pisgah UMCs in the Southern Hills District.