Friends and family gathered after the final service of 2017 for a reception to celebrate Woods’ retirement as choir director, a position she has held on and off for 73 years.

Raised Lutheran, Woods joined the choir at what was then Greentown Methodist Church shortly after she was married because her husband had family members who were active in the church.  Thus began a life of service that, over the years, has led Woods to be, among other roles, choir director, children’s choir director, camp counselor, junior church leader, Sunday school teacher, and Bible study facilitator.

“This church has filled my life,” Woods said.  “I’ve always felt needed.  I’ve never felt I’ve been anybody special, I really haven’t.  I’m here to do things and if there’s things to do, I do them.”

“I’ve been in the choir ever since I can remember but I also remember Juanita being my camp counselor, she was my junior high youth leader, and she directed my children in junior choir,” said Carol Lavy.  “I just can’t imagine being 94 years old and still doing the ministry she is doing!  She’s our backbone.  We are blessed.”

“Juanita’s a special person and a strong leader.  It’s more than just music that she has taught.  She’s taught Jesus and lived Jesus for the people.” Pastor Carolyn Nichols said.  “When I came here last year and was told we had a 93 year-old choir director, I started looking for a 93 year-old woman and I never found her.”

George Manos can attest to that!  He says it’s hard keeping up with his mother-in-law.

“We’re from Pittsburgh and one day I couldn’t get her on the phone at home so I kept calling.  Finally, she answered and I said, ‘Mom, where’ve you been?’ She said, ‘Well I was ringing the bell for the Salvation Army at Wal-Mart.’ I said, ‘Mom, you’re 94!’ and she said, ‘yeah, so what?’” 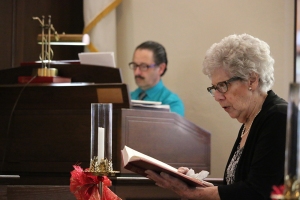 After singing a solo during her final service as choir director, Woods joined her daughter, Karen Manos, and Nichols at the front of the church for a brief celebration of her many years of service.

Manos told the congregation that as children she and her sister grew up playing in the church basement as their mother held choir practice upstairs.  She later sang with her mom in the Canton Civic Opera for 30 years.

“Music should have been Mother’s middle name,” she said. 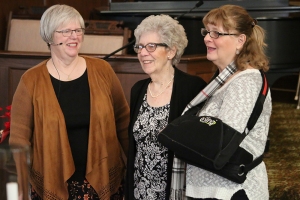 “We love you Juanita not just for the music over all these years but also for your love, the way you have cared for the children that you taught to sing and the adults that you have been with through Sunday school and Bible study, and the way you have touched so many lives,” Nichols said.

“I feel speechless,” said Woods before blowing a kiss of appreciation to the congregation.

Her final act as choir director was leading worshippers in singing Happy Birthday to organist Steve Dallas, a long-time friend who will succeed Wood, and will now serve as her choir director.

“Speaking for the choir, we’ll be mighty glad that she’s going to be singing with us,” said Sherryl Kostolich.