A chance to walk through Peppermint Forest and along the Ice Cream Sea attracted 365 children of all ages to Vienna United Methodist Church (Mahoning Valley District) the weekend before Christmas for a chance to play a life-size version of Candy Land.

Players colored their own gingerbread game piece, collected their game cards, and made their way to the start square.  One-by-one, they took turns drawing a card and moving to the corresponding colored rectangle on the floor.  Along the way, they collected candy from Gumdrop Mountains, Lollipop Woods, and many other sweet attractions. 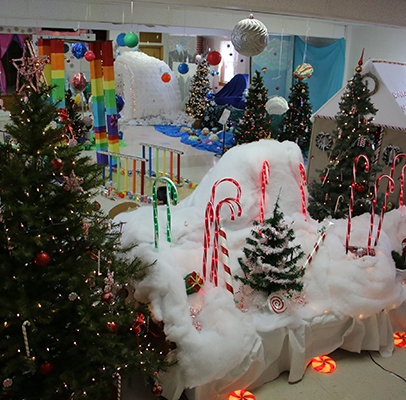 The goal for players was to reach the Candy Castle.  There, Santa Claus, seated next to a manger, told children the story of the candy cane and talked to them about who Jesus is.

“I think this is beautiful.  It’s awesome the amount of work that was put into it,” said Jen Farr, who came to Candy Land with friends.

Pastor Mary Prior said that the idea for the life-size game came three years ago during a conversation with Music Director Rachel Spak.

“We were saying that people don’t come to cantatas anymore and they’re really not interested in Christmas programs.  Rachel came up with this idea and I said, ‘go for it!’”

“I saw something similar at a library a few years before that and thought it would be fun to do at the church,” Spak said.  “It’s been awesome getting a lot of different people here because most of them are not church members.”

“Offering a quality event at no charge during a very expensive season has been our best means of outreach,” Prior said.  “Parents were very appreciative that the Candy Land experience was free, and thanks to TV coverage this year, we’ve had people come from areas of Warren and Youngstown as well as from closer to the church.” 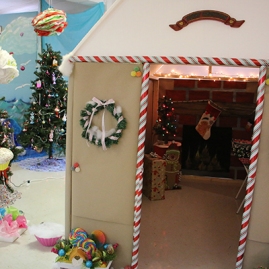 “We heard a little girl and her mom talking as they were walking out,” Prior said.  “The mom asked the girl, ‘What did you learn?  What did you like?’ and the little girl said, ‘I learned that Jesus died for my sins.’  Isn’t that cool?”

“My son is 4 years old and he is just starting to discover the beauty of Christmas and learn about what it means,” said Angela Betrosky. “I saw the ad and just had to bring him.  It’s been great to be here today.” 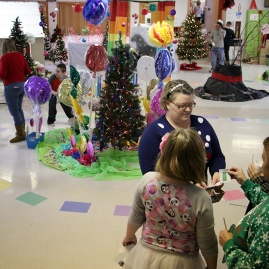 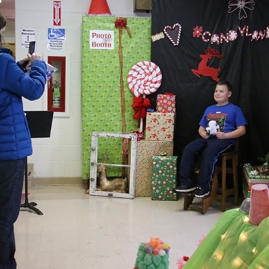 “My wife and daughter go to church here and I know Pastor Mary from out and about because she does a lot of stuff in the community and with the schools, so I came here today to support them,” said Tarin Brown.  “It’s great to see so many people who don’t go to church here come to take part in this.  It means a lot to the community.”

“I’m proud of Vienna for being a church that constantly seeks new ways to connect with its community so it can share the love of Christ,” said Mahoning Valley District Superintendent the Rev. Abby Auman, who brought her family to experience Candy Land.  “Volunteers clearly poured a tremendous amount of effort into making a magical experience for kids, which feels like love when you walk into a transformed fellowship hall.”

“It’s been a breath of fresh air in the church because people are working together while doing something different and something new.  We have a young adult in charge who empowered everyone to be creative and to do their own thing,” Prior said.

Spak said sketching the layout and planning how to construct each of the lands begins in early November but because fellowship hall is used so much the construction window is very tight each year.

“We’ve had about 15 people here each day the past two weeks making sure everything would get done,” she said.

Prior said the labor is not done just by members of the congregation.

“The other churches in town help us promote Candy Land.  We all work hard together to bring new people to Christ through church.”

Plans are already underway to add Rock Candy Canyon to the life-size Candy Land game in 2018.