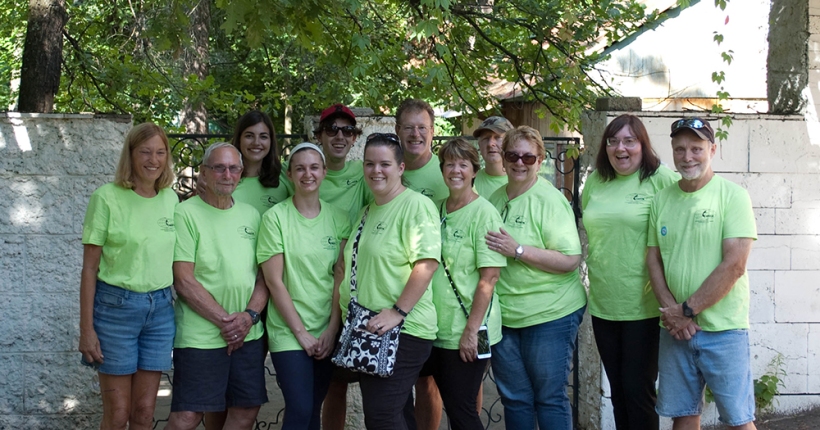 The people of Russia recently witnessed the connection of The United Methodist.  Six people from the East Ohio Conference, two from the West Ohio Conference, two from New York, one from the Virginia Conference, and one from the Baltimore-Washington Conference met face-to-face for the first time in terminal one at JFK International Airport, as we prepared to represent The United Methodist Church while serving at Camp Crystal in Voronein.  It didn’t matter that we didn’t know much about each other personally because through faithfulness, struggles, challenges, and blessings, God was glorified.

We left JFK for a nonstop flight to Moscow. Once there, we spent two and a half days sightseeing, fellowshipping, and praying together.  We saw the Red Square, Kremlin, Space Museum, and much more. On Sunday, we worshipped at Vnukovo UMC, where EOC volunteers in mission (VIM) teams have worshipped many times before. It was great to worship God with our brothers and sisters in Christ and to see old friends. We ended the day on Sunday with a tour of the Tolerance Museum detailing the struggle of the Russian Jews before, during, and after World War II – or as Russians call it, “The Great Patriotic War.”  That night we traveled on a train to Voronezh.

When we awoke, we were greeted by Elena Melnikova and friends and we headed right to Camp Crystal. The last half an hour of the bus trip was on a rather bumpy dirt road. Once we arrived, we were greeted by the campers and staff of Camp Trinity, a special needs camp for young adults and their families. We received the traditional bread and salt and the universal hugs. 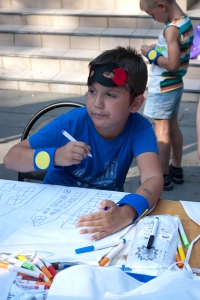 Each of the seven and a half days we spent at Camp Crystal were filled with morning devotions and exercise, meals, a small program about that day’s subject, a craft, work on projects, rest, and evening program and worship. Every night was also capped with a dance party outside.  The theme of the camp was Unfinished Homework. We took a different subject each day, i.e. astronomy, ecology, and history. Our team was charged to lead two days of programs.

On Wednesday, we studied Sociology and talked about friendship. We acted out the story of the Good Samaritan and reminded our campers that we are stronger together. We made a banner with our handprints, and each camper was given an autograph book and encouraged to collect autographs from everyone. We ended the night with a story about friendship and some singing.

On Thursday, we studied literature using the theme of Super Heroes. We performed a skit on David and Goliath, and we made capes and super hero masks. We passed out stickers and tattoos. We ended the day with a story about everyone being a super hero and we gave each camper a super hero Pez dispenser.  It was so great to see all the campers young and old get excited about each of our programs. 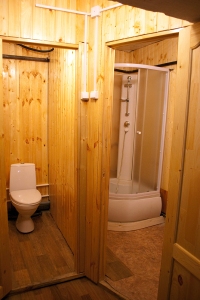 Each day we worked on a project to improve the camp facilities.   Prior to our arrival, a bathroom with toilet and shower was added to one of the large cabins at Camp Crystal using $10,000 sent by our conference/team.  It looks great!  We also donated $1,200 to do projects while we were there. One team tore down an old gazebo and prepped all the wood to begin the creation of a new one.  The other team removed all the old wallpaper from five rooms in the large cabin that now has the added bathroom. We painted the ceilings, prepped the walls, and began hanging new wallpaper.

On Sunday, the camp ended with a worship service. Pastor Rob Pierson of the Baltimore-Washington Conference gave a great sermon and many tears we shed as we said good-bye to the campers.

On Monday, we headed back to Moscow via another train and then home to our respective places.  Everyone was convinced that God and the Holy Spirit were present with us. Many want to come back again. Relationships were the most important thing built that week, and it is my prayer that those relationships will continue to allow God to be served and God’s Kingdom to grow.