Many of the more than 200 people who participated June 7 in the 8.46-mile Peace with Justice Walk both began and ended the walk singing these words from Ella’s Song, written by Dr. Bernice Johnson Reagon.

Born from an idea by the Rev. Don Ackerman, the walk from Crossroads UMC (Tuscarawas District) in Canton to the Ohio East Area Center in North Canton called attention to the eight minutes and 46 seconds that George Floyd, a black man, suffered under the knee of a white Minneapolis, MN police officer before dying on May 25.

“It’s time to acknowledge that we, people that have white skin, are privileged and our lives have been a lot easier because of our skin tone and the least I can do is walk 8.4 miles to take a stance, show some love, and spread some love,” said Erin Froelich as she walked along Cleveland Avenue holding up a sign that read “Hate Has No Home Here.”

“With the number of people who have come out, this is a clear sign that there are so many who care and do want to commit to stand against racism,” the Bishop said as she walked. “For some this may be a first step and for others it’s a continued journey but the number of people who have turned out today it’s a witness to the hope that together we can begin to dismantle racism, every person making a difference, each act, each decision, each plan, everybody doing what they feel they can do individually and all of that together will begin to truly dismantle racism and this is a clear sign of that.”

“It’s a show of unity. It’s a show of what the Church should be about – peace with justice,” said Pastor Michael Farmer of Vine Street UMC (Tuscarawas District) in Alliance. “We have the example of Jesus and we’ve always been falling short of that example, but this is a chance for us to get a step closer as we walk together toward reconciliation and justice.”

It was important for Ashley Bell, a member of the Northern Arapaho Tribe, to participate in the walk.

“Standing in solidarity with people of color, especially the black community right now is very extraordinarily important. This is a system of oppression that has been going on for 500+ years. Everything we have has been built on the lives of slaves. It’s not right that we’re still experiencing police brutality against people of color, particularly black people. It’s just awful so I think it’s really important to be here today for this to show solidarity.” 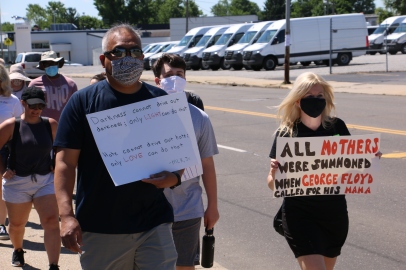 “This is a reminder that we have to be better and a reminder that until white people start standing up and walking, that nothing’s going to change,” shared the Rev. Cindy Patterson.

“I wanted an opportunity to get out here and do something and draw the attention of people who pass by us in cars to show them what happened two weeks ago that is still happening – and that still needs to make an impact on each and every one of us,” said EOC Missions and Community Engagement Coordinator the Rev. Kathy Dickriede of George Floyd’s death, which was ruled a homicide. “It’s time to figure out what our plan is and not just to forget about this and to watch that video over and over again so that we can remember our pain and get grounded in this movement that needs to happen.”

Canton business owner Debbie Wright made the intentional decision to bring her children on the walk.

“It’s important for me to show them that we all need to come together to support everyone in our community.”

Derrick Showell, of Canton, found walking with hundreds of others to be meaningful and inspirational.

“This is a huge turnout that started with one or two people putting this together, so it’s made me think as I’ve been walking, ‘what am I doing?’ There’s a feeling that’s being stirred up inside of me right now and I’m going to see where it takes me.”

EOC Director of Congregational Vitality the Rev. Kelly Brown walked in solidarity as walkers left from Crossroads UMC, but he soon began to run to make a statement.

“It doesn’t matter where I run or how far I am running, I have never been afraid or feared anything happening to me on a run. I am a white male and I have a privileged place in American society.  When people see me, they call me a runner not a black man running or a suspicious person.  I ran today because Ahmaud Arbery died doing what I do all the time and I needed to run as a way to say, ‘I am ready to be part of the change and I am done with living in privilege when others are in fear every day,’” Brown said.

Standing in the parking lot of the Area Center, more than eight miles from where they began, Ackerman thanked the tired walkers but told them their journey wasn’t over.

“We’re not there yet. We still have a long way to go. I would ask that the steps that you took today in these last 8.4 miles, don’t let them be your last. Go from this place taking further steps with one another and with God,” he implored.