Young clergy and newly ordained clergy of the East Ohio Conference embarked on a 10-day pilgrimage to the Holy Land in early February. The trip was the result of a joint effort between Bishop Tracy S. Malone and Brian Sheetz, executive director of the Methodist Foundation of Ohio.

“We both shared a vision of wanting to provide an experience where they themselves would have an opportunity to deepen their own faith walk but also, too, become more knowledgeable of Scripture with the hope that it would help to inform their ministry, teaching, and preaching in their local churches,” Malone said.

Sheetz shared that the Foundation has been focused on young clergy professional development for the past decade.

“We realize that a trip to the Holy Land can really be a critical part in that professional development, a chance to understand the scriptures better, a chance to preach more effectively about that time, a chance really to just understand the life of Jesus a bit more. It’s been a dream of ours for that long. Finally, this year we had grown to the point where we had the resources to make this happen and it’s been just a great week and we’re thrilled that we did it.” 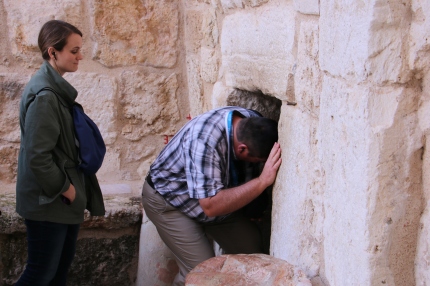 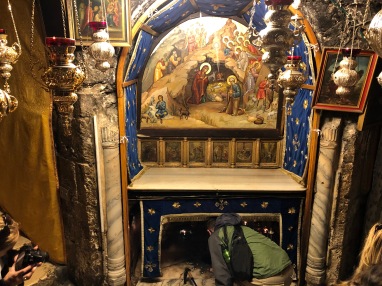 The pilgrimage began in Bethlehem. There, the group of clergy, spouses and mentors visited the shepherd’s field, where they explored a cave used by shepherds to shield their flock from the elements and from predators. Later the East Ohio team entered the Church of the Nativity, built over the believed site of Jesus’ birth, and descended the steps into the grotto below the church to see the place where Jesus was born and the site only a few feet away where he was placed into the manger.

The end of the pilgrimage took the clergy group to Jerusalem where it looked from atop the Mount of Olives over the Kidron Valley to see the Golden Gate and the ancient wall that lines the perimeter of the city. They walked the path that Jesus followed on Palm Sunday to reach the city, stopping to take in the beauty of the more-than-2,000-year-old olive trees growing in the Garden of Gethsemane. They visited the western wall of the temple, and sat on the “teaching steps,” the steps on the southern wall of the temple where Jesus taught the disciples. They walked on stones that Jesus would have walked on, went to the site of the upper room, and spent time in the cistern pit under the house of Caiaphas where Jesus spent his last night on earth imprisoned alone in the darkness. Their last day in the Holy Land the group of young clergy and newly ordained clergy walked the Via Dolorosa retracing the steps Jesus took as he carried his cross to Mount Calvary. They entered the Church of the Holy Sepulchre, built over the site where Jesus was crucified, and climbed the stairs to touch the bedrock that held up the foot of the cross. The pilgrimage ended with communion at the site of the garden tomb. 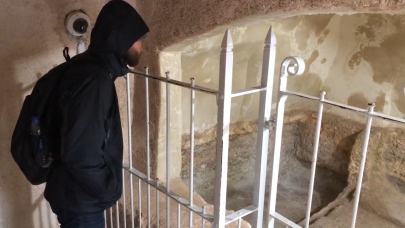 Between their visits to Bethlehem and Jerusalem, clergy crossed the Judean Desert, swam in the Dead Sea 1,300 feet below sea level, saw the caves at Qumran where the Dead Sea scrolls were found, reaffirmed their baptisms at the Jordan River, ate lunch in Jericho, crossed through the security wall that divides Israel and Palestine, climbed to see the ruins of Herodion, drank from Jacobs Well, visited Samaria and Magdala, sang on the stage of the ancient amphitheater in Caesarea, did devotions on the Mount of Beatitudes, took a boat ride on the Sea of Galilee, walked the streets of Capernaum and Nazareth, saw the Valley of Armageddon from atop Tel Megiddo, got a view of Mount Tabor on which Jesus was transfigured, tasted wine in Cana where Jesus performed his first miracle, walked the road through the Valley of Doves that Jesus would have walked to get from Nazareth to the Sea of Galilee, and much, much more.

“The trip has renewed my faith, it’s brought the Bible to life in new ways and now when I read the Bible, I’m going to be able to say, ‘I was there, I was there.’ I’m going to be living the ramifications of this for the rest of my ministry,” said the Rev. Dawan Buie, associate pastor of Medina UMC (Canal District). 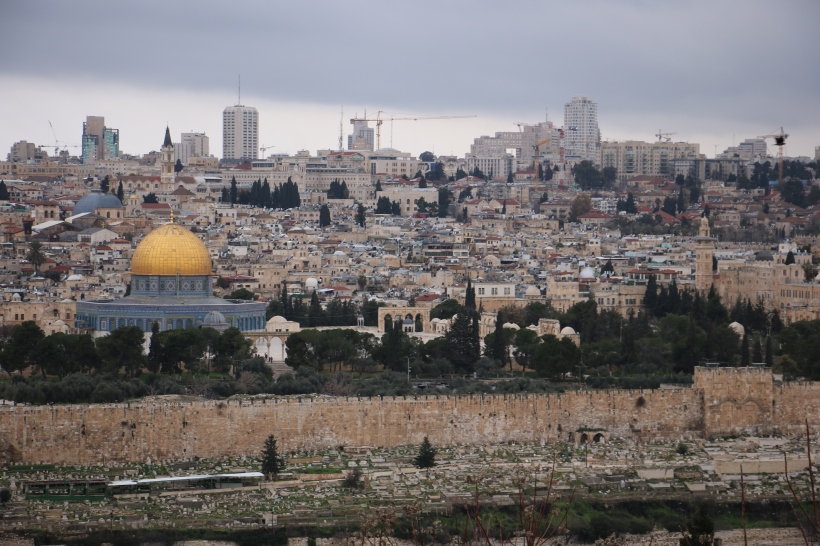 The Rev. Derek Kubilus, pastor of Uniontown UMC (Canal District) said he was only able to participate in this pilgrimage because of the generosity of the Foundation.

“The fact that they were able to make this available to me as a young clergy person at an affordable cost is what brought me here. So, I owe this to them.”

“This is an opportunity I never dreamed I would have, and I think my biggest takeaway is that I will never read scripture the same way again,” shared Pastor Kelsey Orosan, associate pastor of Lorain Lighthouse UMC (Firelands District). “Being able to picture the places where Jesus was and where so many of these miraculous things have happened in scripture – it’s not how I pictured it – so it’s changing my understanding of my own faith journey and how I will read and preach the scriptures.”

During the closing communion service in the garden, Bishop Malone asked clergy for a word or two that would best describe their pilgrimage to the Holy Land. Here are just a few responses:

“mountaintop experience”
“pushing out into the deep”
“in His steps”
“Jesus did all of this for forgiveness and love”
“transformation”
“renewed hope”
“taken, blessed, broken, given”
“forever changed”
“new life”
“blessed to be a blessing”
“incredibly grateful”

Malone said that each time she visits the Holy Land is a renewing experience but that this trip was special to her.

“Being able to travel with my younger clergy and my newly ordained clergy, having an opportunity to deepen my knowledge of them and my understanding of their calls, but also, too, to see them come alive as they visited the different sites. I just know that they will leave here being changed forever and that just does my heart good,” she said. 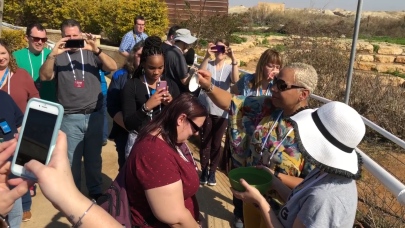 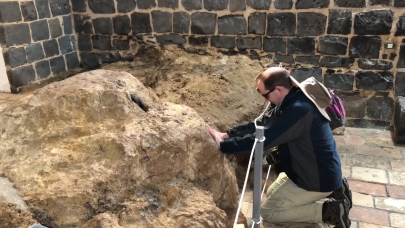 Kubilus spoke for many of the young clergy when asked what he wants the people of the East Ohio Conference to know about them.

“We’re excited to do ministry. We’re excited to push into a new era of United Methodism in East Ohio. These are nervous times for all of us, but I think our young clergy are very excited about where we’re headed,” Kubilus shared.

Sheetz praised the young clergy for the passion that they have for their faith, their ministries, and the denomination as a whole.