Conference Secretary the Rev. Cindy Patterson then informed the house that a thorough review Tuesday night by the programmer of the balloting software used at Annual Conference uncovered an error, that he subsequently corrected.

“Because we value trust, because we value integrity, I am declaring that all of the ballots that were taken prior to today are invalid,” said Bishop Tracy S. Malone. “We want to be able to trust that the work that we are doing that there is no question about the integrity of our system and we don’t want any brokenness among the body, nor do we even want those who were elected to even have their election questioned. It’s all for the sake of the body and the sake of the covenant that we begin again.”

Rev. Gary Henderson, the Rev. Andy Call, and the Rev. Dan Bryant were elected as three of the six clergy delegates to General Conference 2020 to be held in Minneapolis, Minnesota May 5-15.

Jerry Rinehart was elected as the first of six lay delegates to General Conference 2020.

General Conference 2020 will be held May 5-15 in Minneapolis, Minnesota.

In a joint report from the Personnel Committee and the Commission on Pastoral Care, Commission Chair the Rev. David Whitt recognized the retiring Rev. Howard Humphress for his 28 years of service to the Pastoral Care office.

Personnel Committee Chair Rock VanFossen stated that “upon receiving Howard’s retirement notice, the Personnel Committee created a task group to discuss needs, options, the job description, and budget implications for this ministry as we look to the future. The task group included Bishop Malone, representation from the Commission on Pastoral Care, Finance and Administration, Board of Benefits, Board of Ministry, the Conference Lay Leader, and Executive Staff.”

Following months of conversation and review of services available through the Conference health care plans, VanFossen moved that the position of executive director of Pastoral Care and Counseling be discontinued as an employee of the Conference, and that the position be transitioned to a contracted licensed professional. He further moved that a licensed professional be contracted as an interim director while the details of this position are evaluated.

After several questions from Annual Conference members, the body voted to approve the motion. It then showed it’s appreciation for Humphress and welcomed Diane Zerby, who will assume the role of interim director of Pastoral Care effective July 1. Zerby has a LISW-S and more than 10 years of experience. She has been employed as a counselor with the Office of Pastoral Care since 2011.

Brian Sheetz, executive director of the East Ohio United Methodist Foundation, encouraged the laity and clergy of our Conference to build vision and momentum in their local churches.

“Whatever mission looks like in your church, now is the time to focus on doing that work,” he said.

Sheetz then informed the body that Foundation board of directors voted to change the Foundation’s name and expand its service area to any church or mission that can trace its roots to the Wesleyan movement and to any that is in full communion relationship with The United Methodist Church. Effective July 1, the new name will be the Methodist Foundation of Ohio.

In her Cabinet report, the Rev. Sondra Snode, dean of the Cabinet and superintendent of the Western Reserve District, said, “We, like most of you, are aware of the changing landscape of the Church. While caring for the churches, pastors, and laity of East Ohio is important and our common work together, so is visioning and leading in a way that births new ministries and leads more people to Christ. Simply doing things the way we’ve always done them will not fulfill Christ’s call upon our lives.”

Following her report, Snode, who is coming off of Cabinet July 1 to serve Mentor UMC, and the Rev. Dr. Brad Call, superintendent of the Three Rivers District, who is retiring, were recognized by Bishop Tracy S. Malone for their years of leadership on the Cabinet.

Malone then fixed the appointments for the 2019-2020 church year.

Rev. Bill Liming, chair of the Board of Benefits, reminded the body what he had said last year, that while change is hard for him personally he realizes that change is necessary to grow.

“I am reminded to guard my heart, so that goodness and grace will flow from it,” he said during Wednesday’s business session. “The people of Wespath are on top of all changes that may come. Your Board of Benefits is making decisions for the health and well-being of this annual conference.”

In his first report to Annual Conference as chair of the Commission on Equitable Compensation, the Rev. Derek Hickman informed members that the number of churches receiving salary supplementation from Equitable Compensation will be reduced from 10 in the 2018-2019 appointment year, totaling $125,561, to four local churches, totaling $64,151. It is expected that these numbers will continue to decrease in the coming years.

Annual Conference members made two motions relative to sustentation aid, which is available to pastors when they are in financial crisis.

Rev. Paula Marbury moved to refer the Conference explore ways in which we might expand the manner in giving to the Sustentation Fund for all East Ohio Conference. The motion was approved.

Brian Mitchell then moved to refer to Equitable Compensation to allow for any part-time or quarter-time pastor be also eligible to receive sustentation funds now that individuals can donate to the fund. The motion was approved.

Revs. Ray and Cathy Ake spoke via video of their love for missions and the ways God has spoken to and through them as they serve full-time with the Farmer to Farmer ministry in Harrisburg, Liberia. Their ministry, and that of East Ohio’s Adam Shaw in South Korea, put familiar faces to the work of Global Ministries, which is celebrating its 200th birthday this year.

The Akes’ message was the first of a four-part afternoon segment on Wednesday highlighting people and ministries in the East Ohio Conference who are living out the second component of the Conference vision by being God’s agents of transformation in their communities and throughout the world. Rev. Kathy Dickriede, Conference coordinator of Missions and Community Engagement, then introduced the house to clergy, laity, and agencies of the East Ohio Conference who are partnering to transform lives through the Bridges Out of Poverty philosophy and programs such as Getting Ahead, Getting Ahead While Getting Out, Getting Ahead in the Workplace, and R Rules.

She then welcomed back to the stage keynote speaker the Rev. Dr. F. Douglas Powe, Jr., director of the Lewis Center for Church Leadership at Wesley Theological Seminary in Washington, D.C. He reminded Annual Conference members in Hoover, and those watching via live stream, that they must change the ways they think and act to move beyond the 1950s world view that held that individuals should belong to a church and attend services weekly. 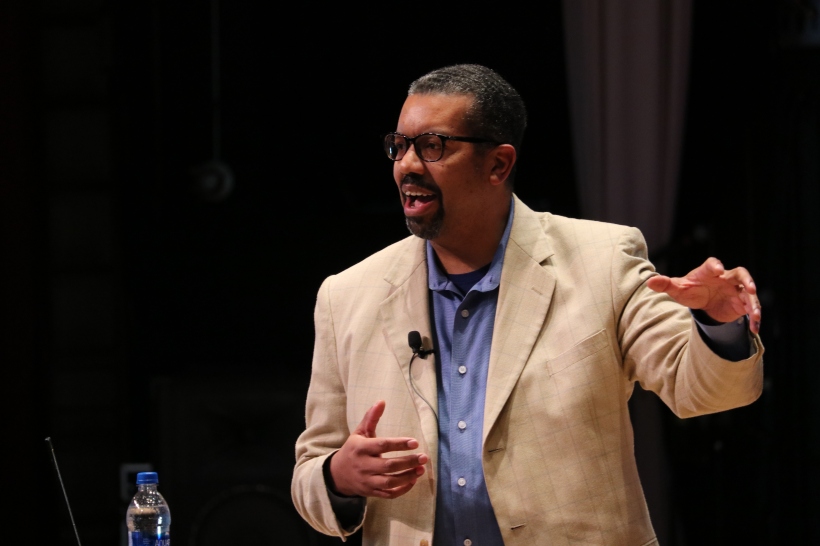 Annual Conference members have had many opportunities throughout the first days of conference to participate in life-transforming mission.

Early Wednesday morning more than 100 people participated in this year’s 5k Run/1-Mile Walk to benefit missions, which raised $7,391. The Three Rivers District raised the most money of any of the 10 EOC districts, with Gay Street UMC and lead pastor the Rev. Karen Oehl celebrated for their efforts in raising $1,615 of the district’s total. Incoming superintendent of the Western Reserve District, the Rev. Edgar Brady, accepted a trophy on behalf of the district for having the most participants in the run/walk.

Later in the morning two collection trucks pulled out of the Lakeside Chautauqua parking lot filled with items that will transform lives, as well as $12,000 in cash donations. A truck headed to the Eastbrook Mission Barn in New Castle, Pennsylvania contained 850 donated cleaning buckets, 750 hygiene kits and 165 school kits. The truck bound for Midwest Mission Distribution Center in Pawnee, Illinois was filled with 1,325 personal dignity kits, 375 school kits, and 185 baby palettes.