For 100 years Ontario UMC (Mid-Ohio District) has been active in school ministry.  To celebrate the milestone, church leadership invited all 215 employees of Ontario Local Schools to an in-service day luncheon last August.

In meeting with the district superintendent to plan for that lunch, the Rev. Peg Welch inquired how the church could best help the school if it received grant money it had applied for from the East Ohio Conference.

“She said that one of the biggest problems they had was the number of grandparents raising kids because the parents of the kids – their own children – are out of the picture, mostly because of the opioid crisis,” Welch said.  “We have three in our own church who are raising their grandchildren so I was aware of the need.  But I did not know that there are an estimated 4.2 million children across the United States being raised by kin.  It’s an enormous problem.”

Welch says that school districts don’t always know exactly how many children are being raised by grandparents because none of the school forms ask the caregivers filling them out what their relation is to the child.

“Estimates in the Ontario Local Schools is that as few as two and as many as four out of 10 students are being raised by kin – 20 to 40%,” she said.

“The word needs to get out.  We don’t believe that people know what is going on,” said one grandparent who is now raising his grandchild.

He and other adults who find themselves in the unexpected role of parenting grandchildren and kin meet at Ontario UMC monthly during the school year.  On this night, 10 adults and 12 children, between four and 13 years of age, attended Grandparent Night at the church.

“There’s nothing out there to model so we tried a couple of different ways that didn’t work before we finally hit on a successful formula,” Welch said.  “We meet in the evening because some of the grandparents are still working, and we provide a meal and child care, so the grandparents can be here in the first place.”

A one-time grant from the East Ohio Conference of The United Methodist Church helps fund the program, which is promoted online, on flyers distributed by the school, and on the exterior signs of the church and the schools. 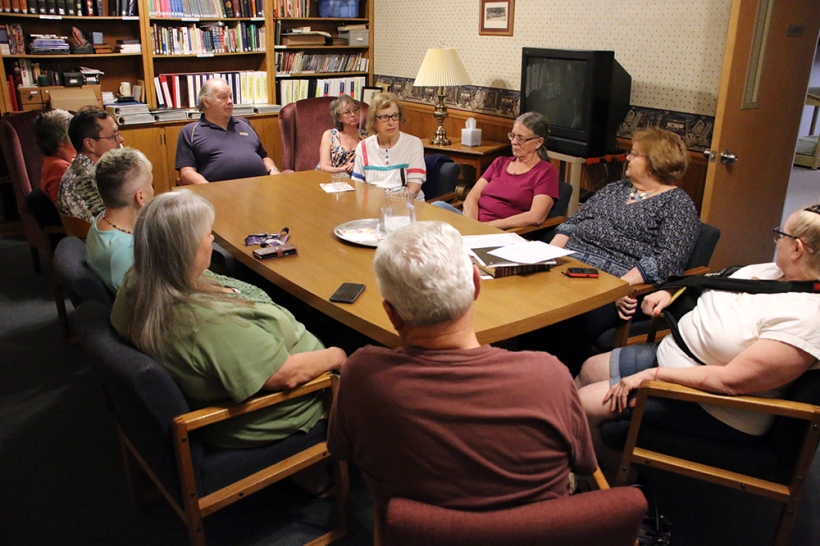 The Thursday evening meeting is co-led by Welch and Ontario Schools Social Worker Amy Kurtz-Nagel.  Those attending the meeting have opportunities to tap into resources, as well as tell their stories – which is therapeutic to the person sharing and informative for those who are listening.

“Coming here I learned that I am not alone, which is so helpful to know,” one grandparent shared. 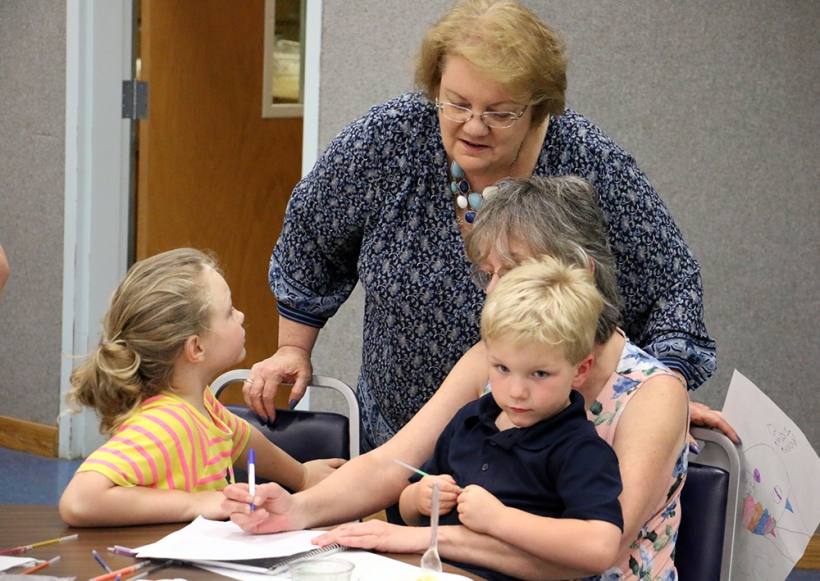 “When I first heard the superintendent talk about grandparents raising their grandchildren I thought ‘what a shame they don’t get to be grandparents, they miss out on the fun parts because they have to be parents.’  I had no idea that that was the least of their concerns,” Welch shared.  “They’re fighting their own children for custody.  They are fighting the courts and even the agencies that are supposed to help them.”

Several adults at the meeting echoed the disappointment shared by one grandparent who said, “I thought the job of Children and Family Services was to protect the kids but they have come out and told us that their job is to reunite the children with their parents – even if they’re not fit to parent.”

“The courts tell you that security is needed in a child’s life, but when they and Children and Family Services are part of the problem – by taking them away from loving environments – they don’t get that security,” another added.

“How do you give a child the security they so desperately want without going broke?” another asked.

“A lot of people can’t afford taking over and trying to raise their grandchildren. My savings are gone just to pay for child care.  It’s what we are all facing,” said another grandparent.

“I don’t want a reward for raising our grandchild, but I don’t want to be penalized, either,” said another.

They spoke about the children they are raising with love and pride.  But they also acknowledged that the kids have frequent nightmares, feel abandoned, have anger and behavioral issues, and constantly seek the approval of others – problems that children their age should not have to face.

“They long for chaos,” one grandparent confided.  “They don’t want it, and they’re sorry after they cause it, but that is what they are used to in their life.”

“Their needs are enormous and I am finding that this is some of the best ministry I’ve ever done outside of the church because there’s nobody else meeting those needs,” Welch said.

“The grandparent ministry has made a positive difference in the lives of several Ontario families,” Carmichael said.  “It provides a sense of community, a sense of knowing they’re not alone.  Grandparents openly share their challenges, without judgement. Many have shared with me that they appreciate having this forum to engage and talk freely about their concerns.”

“The children feel normal when they come here for the meeting,” said one grandparent.  “At school they get picked on because they aren’t being raised by their mother or father.  But here that isn’t an issue because all of the kids are being raised by grandparents.  They can talk with one another and share their feelings.”

Two of the grandparents have begun attending Ontario UMC with the children they are raising because of the way they have been welcomed on Thursday night, and Welch shared that the church youth group has doubled in size since Grandparent Night began last fall.

“This is a valuable ministry and I’d love to see more churches launch groups,” she said.